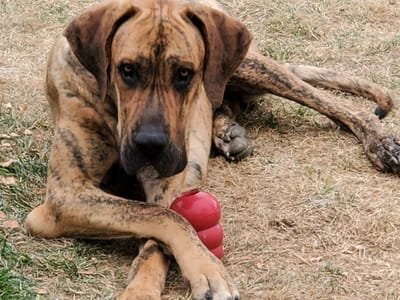 This page is dedicated to Mr. William 'Bear' Laney in Rudyard, Mt.

He and his wife, Angel, were in a car accident on Aug. 17, 2022. They were both taken to the hospital and Bear was listed as critical and put on life support. He passed on Aug. 18, 2022. HIs wife has requested that in lieu of any flowers or other memorializations, donations be made to PPRS. Bear was very proud to be an American and served his country well. He was also very proud of his Native American heritage as well.

Bear and Angel have become great supporters of the rescue and have adopted 2 dogs and helped adopt out several as well. Thor, the reverse brindle Daniff, was his pet project. Thor was about a year and 3 months when they adopted him to become a service dog for Bear as his beloved Roxie, a mastiff had passed in March of 2021. Bear had taken Thor to several Dr. appointments, the mall and shopping in 2022. He was less than 2 yrs old and did very well each time. In the mall, he spotted a bat on the ground and kept his place by Bear. Same for everywhere else, he even did great when a 4 yr old yelled "Doggie", ran up to Thor and hugged him. Thor kept his cool. Bear was so very proud of his accomplishment with Thor.

And I am honored to call both of them my friend and supporters of the rescue. They have given not only some financial assistance, but have helped in so many other ways. Donating yard sale items, time working with me to help get the dogs introduced and working together. Training tips for some and my Dane pup Lily Kate. She is so great due to their help. They even helped me move when we needed it.

Please help honor his memory. If money is not possible, and you are not near, just let people know we exist. Or offer to help in your local shelter or rescue in his name.

Thank you so much in advance. Pics coming soon! Kim